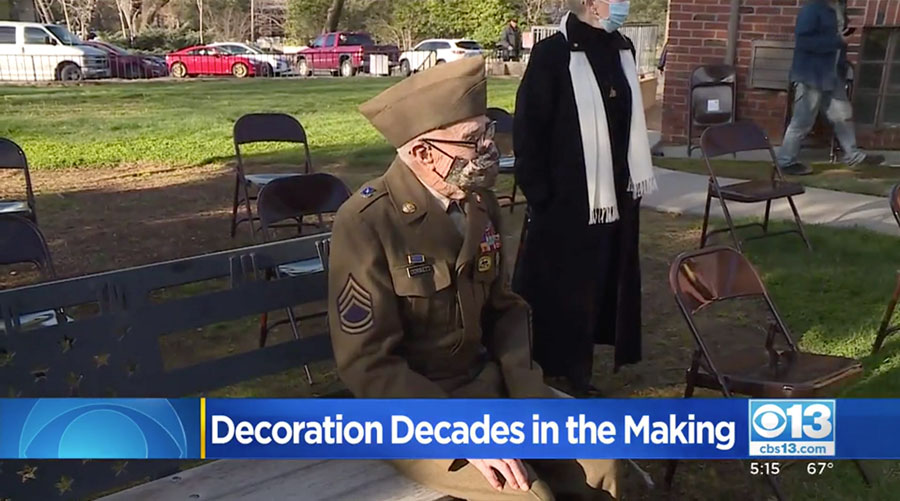 Cheering, saluting and capturing the moment all took place on Monday morning at the American Legion Post 84 in Auburn, California.

All of the fanfare and proverbial red carpet was rolled out on the lawn of the American Legion for Marvin Cornett. The local U.S. Army World War II paratrooper veteran is 99-years-old and set to turn 100 in July.

On Monday, he was awarded an honor that’s been owed to him for more than 76 years after being injured.

“It was very surprising that he didn’t have his Purple Heart. We found out a few months ago,” Jan Mendoza, Cornett’s daughter, said.

Cornett was injured by mortar fire in Italy back in 1944 while serving with the 82nd Airborne. He didn’t receive a Purple Heart.

Fast forward to the present day, Cornett’s family contacted a veteran-owned company called Heritage Arsenal. The company dug into his record finding the missing medal, a Purple Heart, that should’ve been pinned to his chest.

“I asked Jan, his daughter, what she wanted to do. I said, ‘You know, there is a mechanism that we could actually get him awarded this medal all these years later,’ And she was all for it,” William Linn, the Vice President of Heritage Arsenal, said.

Linn said that they worked with the Army and the honor of the Purple Heart was approved for Cornett.

“He’s never wanted to talk about those experiences. So for him to finally open up and accept the recognition of what he went through, that is phenomenal,” Marleen Maltby, Cornett’s daughter, said.

On top of finally getting the medal, Linn told CBS13 that Cornett also got a formal presentation of his Bronze Star that he was awarded years ago.

The vice president of Heritage Arsenal said that Cornett earned a Bronze Star based on a change to the Army’s Combat Infantryman Badge back in 1947 Cornett was previously awarded.

Linn said that it was a “blanket general order for all soldiers who that applied to,” adding that Cornett wore that Bronze Star for the rest of his military career.

The Army sent an engraved Bronze Star to be presented along with the Purple Heart, according to Linn.

Applause rang out on the American Legion lawn as both metals were pinned to the chest of Cornett’s military dress uniform.

Plenty of love and admiration was paid to the local veteran. The man of the hour had just the right way to sum up what it meant to have those medals pinned.

This award ceremony also holds significant meaning when it comes to honoring those veterans who are a part of the “Greatest Generation,” seeing as there aren’t many who are still living.

“There’s not many of them around. So I think it’s the last opportunity for the Army to make it right. And, I think my dad is kind of representing the whole gambit of them,” Mendoza said.