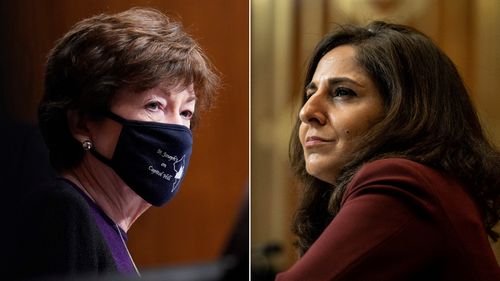 The confirmation of Neera Tanden to lead the Office of Management and Budget is on the brink of collapse after four key Republicans announced Monday that they will vote against her nomination, citing her past social media behavior.

Tanden’s nomination in the evenly split Senate was jeopardized late last week when Democratic Sen. Joe Manchin of West Virginia said he would not support her, making her confirmation dependent on attracting at least one Republican vote.

But two Republicans who were viewed as potential swing votes, Sens. Susan Collins of Maine and Mitt Romney of Utah, declared Monday they will not support her. Two others — Sen. Rob Portman, an Ohio Republican, and Sen. Toomey, a Pennsylvania Republican — also announced they would not vote for Tanden. The White House has publicly defended Tanden’s nomination, but sources have told CNN talks are underway about possible replacements.

In a statement, Collins cited Tanden’s “past actions” that she says demonstrated animosity and said the OMB nominee does not have the “experience nor the temperament” to lead the office.

“Congress has to be able to trust the OMB director to make countless decisions in an impartial manner, carrying out the letter of the law and congressional intent,” Collins said. “Neera Tanden has neither the experience nor the temperament to lead this critical agency. Her past actions have demonstrated exactly the kind of animosity that President Biden has pledged to transcend.”

Collins continued that Tanden’s deletion of tweets before her confirmation was announced “raises concerns about her commitment to transparency.”

A spokeswoman for Romney said he could not support Tanden and what he believes to be her divisiveness.

“Senator Romney has been critical of extreme rhetoric from prior nominees, and this is consistent with that position. He believes it’s hard to return to comity and respect with a nominee who has issued a thousand mean tweets,” Romney’s press secretary Arielle Mueller said in a statement.

“When President Biden announced his intention to nominate Ms. Tanden as OMB Director, I expressed concern and urged him to reconsider. As a former OMB Director, I know that the OMB Director has to be able to work productively with members of Congress on both sides of the aisle,” Portman said, pointing to Tanden’s past tweets and public statements.

He added, “While the president has the right to choose his own Cabinet, and thus far I have supported all of this administration’s nominees, I will not be supporting the confirmation of Ms. Tanden.”

Democrats hold the Senate by a 50-50 margin, and Manchin’s announcement was seen as devastating for her chances.

One senior Democratic senator involved in discussions about Tanden’s nomination believes there’s virtually no path to confirm her to the position. The senator predicted that the nomination will collapse and believes the White House will have to withdraw it before key Senate committees vote on it this week. “They’re going to have to pull her,” the senator told CNN.

The best chance for Democrats: if they limit defections to Manchin, and then another GOP senator who is seen as a potential swing vote, Lisa Murkowski, saves the nomination.

The Alaska Republican told reporters Monday evening that she had not spoken with the White House about the nomination, and, when asked if she had made a decision yet, said: “I’m still visiting.”

Manchin told CNN earlier Monday he had spoken with Tanden, who was “very, very gracious,” and said they had a “real nice conversation.”‘ But he said that he was still opposed to her nomination.

The West Virginia senator said last week that he would vote against Tanden because of her past criticisms on social media about Republicans, including Senate Minority Leader Mitch McConnell, as well as Vermont Sen. Bernie Sanders, an independent who caucuses with Democrats. That remained his reason Monday for opposing her nomination.

Senate Majority Leader Chuck Schumer said Sunday he is working with President Joe Biden to gather support to confirm Tandem. The President has said he does not intend to pull Tanden’s nomination, and a White House official said it is still engaging members to try and find votes for her confirmation.

Asked by CNN’s Kaitlan Collins on Monday if the White House believes Tanden’s past rhetoric was inflammatory, White House press secretary Jen Psaki said “the President would not have nominated her if he did not think she would be an excellent OMB director,” adding, “we simply just disagree with whether she’s the right person for the job with these senators.”

“He nominated her because she is qualified, because she is somebody who has a proven experience and record, as I outlined earlier, of working with different groups and organizations with different political beliefs, and because he believes that her own experience will contribute to taking a fresh perspective and a fresh approach to this position,” Psaki said during a White House briefing.

Pressed on whether Biden had concerns with Tanden’s statements, Psaki told Collins, “I think I’ll leave it at what I’ve said so far.”

Behind the scenes, the White House is lobbying lawmakers who haven’t said which way they’ll vote but are fully aware of the uphill battle Tanden is facing, according to sources with knowledge of the conversations.

There is still a chance that Tanden withdraws on her own and White House officials are also discussing possible replacements, officials said.

Shalanda Young, who last month was nominated as deputy director of the Office of Management and Budget, has emerged as a leading contender for the position, an official familiar with the matter told CNN.

Young, who was the first Black woman to serve as the staff director of the House Appropriations Committee, has strong relationships on Capitol Hill — “with Republicans and Democrats alike,” the official said.

Other names being discussed include Ann O’Leary, who resigned in December as chief of staff to California Gov. Gavin Newsom, former national economic adviser Gene Sperling and John Jones, the former chief of staff to Missouri Rep. Emanuel Cleaver who has worked extensively with the Congressional Black Caucus.

This story has been updated with additional reporting Monday.