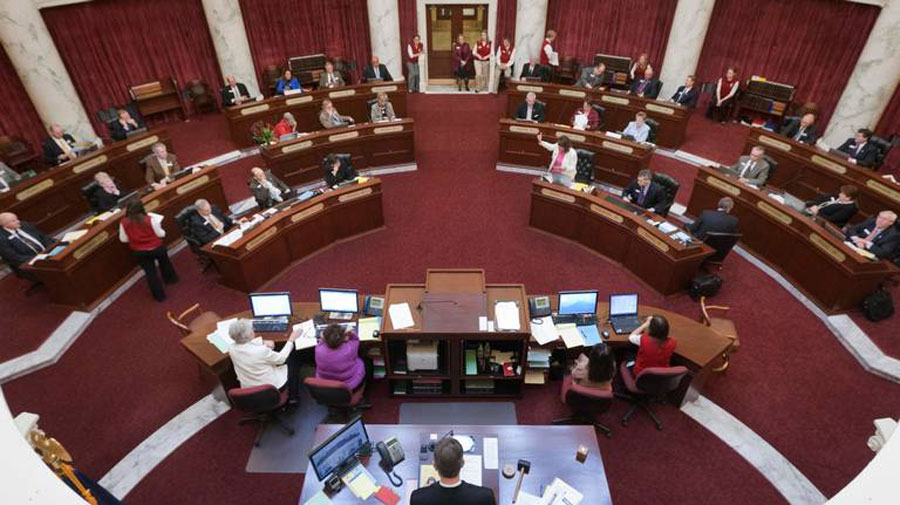 BOISE (Idaho Statesman) — A bill that would make the process to place a citizen-led initiative on the ballot more challenging in Idaho will head to the Senate floor for a vote.

After more than three hours of public testimony, most of the speakers opposed, a panel of senators approved Senate Bill 1110 on Friday. It would require that a petition to place an initiative on the ballot include 6% of registered voters from each of Idaho’s 35 legislative districts. Currently the state requires that signatures come from 6% of voters in 18 districts.

The bill contains an emergency clause and would take effect immediately it it’s passed.

More than 100 members of the public tried to speak at the first public hearing Wednesday. Many of them were unable to sign up as they overwhelmed the online system for remote testimony.

Stephanie Hanson, who volunteered for Reclaim Idaho during for the 2018 Medicaid initiative, said both rural and urban voters would never have been able to vote on Medicaid expansion had this bill been in place. Hanson said she believed it would bar in-state grassroots efforts from placing an initiative on the ballot and favor large interest groups that are able to fund such an onerous process.

“I’m very confused how a state legislature that prides itself as being conservative could even consider supporting this bill since doing so would fly in the face of conservative principles of self-determination and less government,” Hanson said Friday.

Sen. Steve Vick, R-Dalton Gardens, who sponsored the bill, said he believes urban and rural voters “have different interests in many cases.”

“I think that it’s important that we have that broad spectrum of support for an initiative before it gets on the ballot,” Vick said.

Senate Minority Leader Michelle Stennett, D-Boise, said the bill would be the most restrictive in the country, and effectively weigh voters in rural areas over urban areas that ultimately have more people voting.

“I’m just trying to understand how this is equitable because it just doesn’t make sense to me,” Stennett said.

During the public hearing, some supporters of the bill lived in rural areas and said they didn’t feel represented in the petitioning process for an initiative.

Scott Steele, from eastern Bonneville County, came to support the bill and believed it would give him more of a voice.

“I have no representation in the current initiative process.” Steele said.

Russ Hendricks, of the Idaho Farm Bureau, testified in support of the bill Friday. He said that if an initiative can’t garner about 1,735 signatures from every district, “it is probably a bad idea.”

“Our members believe that if an issue is so important and so compelling that it must go before the people, then all areas of the state should have a say in the process of getting it there,” Hendricks said.

But many critics said the bill gives veto power to one legislative district over the will of the majority and believe it infringes on voters’ constitutional rights. Some pointed to rural voters’ ability to bring an initiative on the ballot would also be far more difficult.

The notion that rural voters must live under decisions made by urban voters, and that urban voters never struggle with the same problem, is “a horrible blind spot,” Burgoyne said. “And I think it raises real issues about who we are” as a state.

And then the pandemic hit.

“Let’s be honest about why we’re here today,” Belville said during public testimony Friday. “Changing the rules in the middle of the game is patently unfair.”

He pointed to previous attempts by legislators to make the initiative process more challenging.

In 2013, after Washington voters approved recreational marijuana, legislators approved a resolution that essentially said they would never legalize marijuana. In 2019, shortly after voters approved a measure to expand Medicaid, a bill would have raised the number of required signatures and legislative districts and created other hurdles. That bill, sponsored by Sen. C. Scott Grow, R-Eagle, was vetoed by Gov. Brad Little.

Grow this year sponsored a measure that would lock in the state’s current drug laws. Currently illicit psychoactive drugs not approved by the Federal Drug Administration, including marijuana, would be barred not just in Idaho code but in the state’s constitution.

Many of them, including Grow, said on the floor they believed voters should get to decide.

“Let Idahoans choose whether they want to live in a drug-free state, free from drug culture or not,” Grow said.

0 0 0 0
Previous : FEMA: Texans in 77 counties can now apply for federal disaster assistance
Next : An Ohio bomb squad was called to disarm an adorable bag of kittens