Idaho Gov. Brad Little received a dose of COVID-19 vaccine on Jan. 25. “I’ve received the first dose of the safe and effective COVID-19 vaccine! I am feeling great and back in the office, hard at work for the people of Idaho,” Little said in a tweet.

BOISE (Idaho Statesman) — Rarely has the term “cautiously optimistic” been more fitting than when Idaho leaders talk about the state’s coronavirus cases in 2021.

From local public health experts to the governor, the people responsible for Idaho’s COVID-19 pandemic battle see a light at the end of the tunnel.

All of Idaho’s COVID-19 numbers are looking better than they have in months.

The daily cases for Idaho are a fraction of their fall peak — dropping from a high of 2,298 on Dec. 9 down to 314 on Friday, according to the Idaho Department of Health and Welfare’s statistics. Hospitalizations of people with COVID-19 have stubbornly remained above 140 people a day, but they’re now at levels unseen since late September. The same is true of people needing ICU care for coronavirus complications — about a third the ICU admissions Idaho hospitals were reporting in December.

“People have just got to continue to be careful,” he said. “Right now, we’re in a race to get the vaccine into as many arms as possible.”

BUT WHY ARE IDAHO’S CORONAVIRUS CASES FALLING?

The Statesman talked with public health experts and Little about what they’re hearing — and their theories about what’s causing the situation to get better in Idaho and across the country. They said it’s probably a mix of a few factors.

They also stressed that, while it’s worth celebrating, it’s not a cue to throw away your mask and hang out in packed bars.

There are wild cards in the future. Students and teachers are going back to face-to-face classrooms with full classes. A public health board on Friday lifted the mask mandate for Ada County. (Boise’s mask mandate remains.) And this week, one of the most concerning variants of the coronavirus was confirmed in the Treasure Valley, while two other variants were found in Boise-area wastewater.

“People think we are in the home stretch — cases down, hospitalizations down, vaccines rolling out,” state coronavirus working group member Dr. David Pate said on Twitter. “They have no idea what is coming, and now our school boards and (Central District Health’s board) are reinforcing those beliefs by their actions. I am trying to sound the alarm, but apparently no one is within earshot.”

ARE PEOPLE GETTING BETTER AT COVID-19 PROTOCOLS?

Idaho has seen two major surges of COVID-19. The worst kicked off in October and peaked in early December. Public health officials begged people not to travel or host large gatherings for the Christmas and New Year’s holidays, fearing the worst.

But a third surge never materialized. The opposite happened. Cases went down.

“Everybody from the CDC to almost all the experts have not gotten everything right, because there’s a myriad of things” involved in the pandemic, Little said. “Obviously one of them is behavior. Part of that, we believe, is awareness we did through ONE Idaho (COVID-19 prevention campaign), but we also think … as time went on, (more Idahoans) knew someone who was really sick” or who died from COVID-19.

Two public health experts think that might be part of the calculus that put Idaho’s case counts on a downward slope. But how much? They’re not sure.

“We’ve been living with COVID for about a year now,” said Kimberly Link, communicable disease control manager for Central District Health in Boise. There are “more permanent changes in how we’re interacting with one another, both in our homes and in public, that are safe practices. … Masking and physical distancing have become part of the way we live, and that is going to impact the way the illness is transmitted.”

Little said Idahoans have sacrificed during the pandemic — staying home, postponing trips, not visiting loved ones, losing a business or their job because of the economic toll of COVID-19. Thousands of Idahoans also lost loved ones to COVID-19.

People whose sacrifices prevented more deaths and helped to slow the spread of the virus “are part of the reason we are where we are” with better control of outbreaks, Little said. 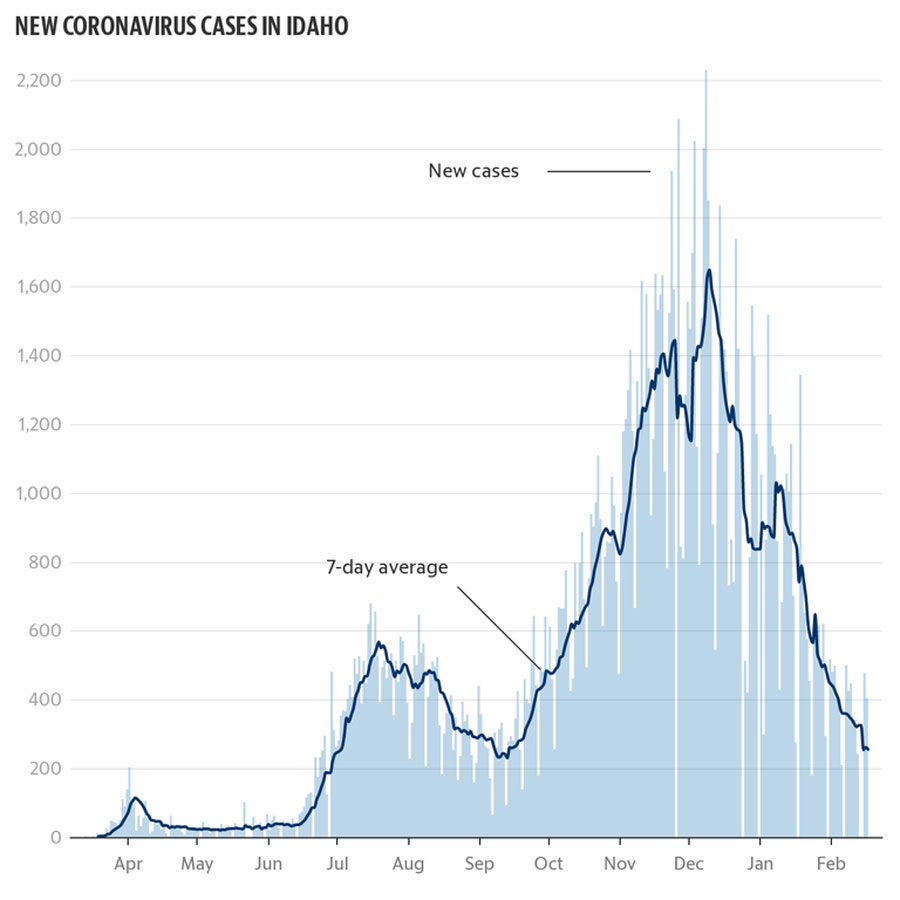 COVID-19 has hit Idaho in waves since the first case was announced March 13, 2020. Fall brought the state’s worst surge, with hospitals and clinics around the state overwhelmed by sick employees and hospitalized patients. New infections took a steep slide in December. There was a much milder-than-anticipated post-holiday spike in January, followed by a steady decline.

Dr. Sky Blue, an epidemiologist and infectious disease specialist in the Treasure Valley, says some people have floated this theory. It doesn’t hold up.

A lower positivity rate means a community’s infection rate is low enough that it can catch many of its infections by testing people. When cases are raging out of control, the positivity rate goes up — because there are so many people catching and spreading the virus, the health care workers and laboratories that do the tests can’t keep up with demand.

The percent of Idaho COVID-19 tests coming back positive now is inching close to 5% — the upper limit recommended by the World Health Organization. Three months ago, Idaho’s positivity rate was nearly 20%.

WHAT ABOUT VACCINES? DO THEY DESERVE CREDIT?

Yes, but it will be weeks or months before Idaho sees the full effect of vaccines in controlling the spread of the coronavirus.

Many public health experts see vaccination as the clearest path to something approaching “herd immunity” from the COVID-19 virus.

People start to build immunity against COVID-19 after their first dose of the vaccine. But getting 90% or better protection requires a second dose three or four weeks later (for the current vaccines from Moderna and Pfizer), plus a few weeks for the body to build up immune cells.

Idaho’s first vaccinated frontline health care workers, long-term care facility residents and staff have only reached that point in the past few weeks. As more people get vaccines, the “herd” will grow.

A recent decline in outbreaks at long-term care facilities in Idaho underscores that timing, Link said.

“That’s one area where the vaccine has definitely had an impact,” she said. “If we see 70% to 80% of those residents being vaccinated,” that can keep vulnerable Idahoans from getting infected and, in some cases, dying.

More vaccines are on the way. The federal government is accelerating its vaccine rollout, shipping out more vials to Idaho and to retail pharmacies including Idaho Walmart and Albertsons stores.

Those factors — plus reclaiming doses that were sitting unused in a special federal program — has given Idaho a boost. The state ranked 18th in the U.S. for administering its vaccines, the state’s Coronavirus Vaccine Advisory Committee chairperson said on Friday.

Little is optimistic about vaccines. He said a hospital leader in Cascade just reported vaccinating 500 people — a number equal to almost 5% of the population of the entire county — in one day.

IS THE CORONAVIRUS CHANGING?

Little said his public health team has always told him, “Viruses do what viruses do, and that they change.”

Those changes are a normal part of the evolution of a virus. It mutates as it makes copies of itself inside a person’s body.

Some mutations can make the virus more infectious — as scientists believe happened with a few “variants of concern,” such as the B.1.1.7 variant first discovered in England.

Little said those variants are under the world’s microscope now, “but we think maybe the existing coronavirus (that has dominated in Idaho) may be getting less infectious,” he said.

IS IT SEASONAL? THE FLU COMES AND GOES, RIGHT?

“We’ve seen these waves or spikes in illness happen,” Link said. “There is some nature of coming and going and what ultimately causes it is, I think, a little bit speculated about, but it’s not uncommon.”

But epidemiologists have their doubts about COVID-19 easing up because it’s going out of season. That’s because the other classic seasonal virus — influenza — usually arrives in Idaho in the fall. And it usually peaks right about now.

DID THE VIRUS RUN OUT OF IDAHOANS TO INFECT?

The Magic Valley could be one case study for what makes a virus surge and retreat.

Twin Falls saw a massive surge in October. The regional hospital got so overwhelmed, it had to send patients to the Treasure Valley. That lasted for weeks.

Local officials declined to clamp down on activity while the virus spread. They voted down mask mandates.

And then, in mid-November, something changed. Cases fell. Hospital beds opened up. The positivity rate got better.

Was it because people heeded the call for personal responsibility, donning masks and keeping their distance?

“If you’ve ever walked through anywhere in Canyon County or Twin Falls, you know that’s not true,” Blue said.

What he and others suspect — noting that all of this is speculation — is an odd kind of isolated herd immunity.

“We have some folks who have been so diligent with masking and isolation, they’re probably not being exposed,” Blue said. That group has self-selected out of the herd.

“Then you have the others who wouldn’t put a mask on if their life depended on it,” he said. That group is COVID-19’s free ticket into the herd.

For the past year, those groups haven’t been mixing like they would before the pandemic, Blue said.

“So you don’t see that taking off quite like the wildfire it was for a while,” Blue said.

But those who haven’t been infected cannot stay home forever. And those who recovered from COVID-19 won’t be immune forever.

Idaho cannot reach a true “herd immunity” without many more people dying and being hospitalized.

That’s why Blue and others hope Idahoans will take the vaccine.

Blue believes the virus will become “endemic,” bouncing around forever like the flu. Vaccines and post-infection immunity would likely make the disease less severe as time goes on, he said.

CAN IDAHOANS RELAX ABOUT COVID-19 NOW?

This question prompted a few seconds of silence on the other end of the phone during interviews.

While the board that governs her agency voted Friday to lift Ada County’s mask mandate, Link said the importance of the public health guidance to keep wearing masks has not changed.

“Masking and physical distancing, I really do truly think that those are going to be — above anything else — the things that really get us through all of this,” she said. “Those are the first things that came on board, and they should be the last to go.”

If the virus starts to spread uncontrollably again, it could go from 500 cases in Ada County this week to 2,000 cases a week in March, she noted. That’s what happened in previous surges.

Her advice to everyone? Be careful.

“I think that anytime somebody is going out outside of their home and spending time with people they don’t live with, masking and physical distancing need to be a cornerstone,” she said.