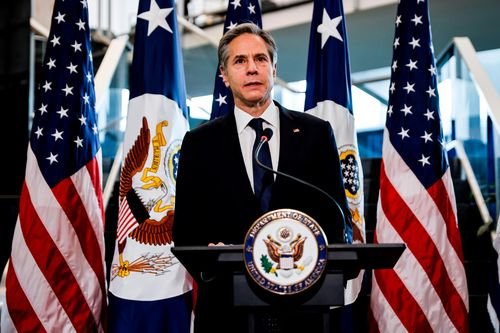 In a significant move to jumpstart diplomacy, the Biden administration said Thursday that the US is willing to sit down for talks with Tehran and other signatories to the Iran nuclear deal, before either side has taken any tangible action to salvage or return to compliance with the agreement.

“The United States would accept an invitation from the European Union High Representative to attend a meeting of the P5+1 and Iran to discuss a diplomatic way forward on Iran’s nuclear program,” State Department spokesperson Ned Price said in a statement Thursday. The P5+1 refers to the permanent members of the UN Security Council — China, France, Russia, the United Kingdom and the United States — and Germany.

It is a move to the lay the groundwork for diplomacy that could eventually break the ongoing impasse between Washington and Tehran, both of whom have insisted the other must act first. The US officials were careful to stress that their willingness to sit down with partners and Iran wasn’t a concession or even the beginning of nuclear talks, but instead, was simply the first diplomatic step to figure out how to begin discussing issues of substance.

“Until we sit down and talk, nothing’s going to happen. It doesn’t mean that when we sit down and talk we’re going to succeed, but we do know that if we don’t take that step, the situation is just going to go from bad to worse,” the first senior State Department official said. “It’s a meaningful step, but we recognize it’s just one of many that will have to be taken from all sides.”

Enrique Mora, deputy secretary general for political affairs of European External Action Service, said on Twitter that the Iran nuclear deal, which the US abandoned during the Trump administration, was “at a critical moment.

“Intense talks with all participants and the US. I am ready to invite them to an informal meeting to discuss the way forward,” he said.

It is unclear if the Iranians would accept such an overture, the official told reporters Thursday, nor has a meeting been scheduled.

It was one of several efforts the administration unveiled Thursday in an effort to lay the groundwork for diplomacy.

CNN reported earlier Thursday that the Biden administration might send a signal that they were prepared to re-enter into a serious process with Iran and members of the Joint Comprehensive Plan of Action (JCPOA), the formal name for the Iran nuclear deal, but at that point the details were still being worked out.

The administration informed the UN Security Council that it was reversing the Trump administration’s unilateral efforts to snapback UN sanctions on Iran. Then-Secretary of State Mike Pompeo claimed in September that the US had reimposed all UN sanctions on Iran, despite no longer being a party to the nuclear deal, in an effort that was roundly rejected by other UN member states.

“Snapback was designed to help ensure that Iran performed its commitments under the JCPOA,” a second senior State Department official said. “No other member of the UN Security Council agreed that the previously terminated provisions of prior resolutions had snapped back last September, despite the prior administration’s position. So that essentially isolated the United States on the Security Council and in the UN system and weakened our ability to work with our allies and partners on the Security Council to address Iran’s destabilizing activity.”

“By reversing this position it basically puts us back in good stead with our with our allies and partners and strengthens our ability to engage other Security Council members on Iran,” they added.

US is also lifting travel restrictions on Iranian diplomats

The US is also lifting travel restrictions placed on Iranian diplomats to the United Nations by the Trump administration that limited the foreign envoys to their missions and the grounds of the UN in New York City.

The second senior State Department official said Thursday the US was removing the travel restraints to facilitate diplomacy to revive the faltering international agreement about Iran’s nuclear program.

“The idea here is to take steps to remove unnecessary obstacles to multilateral diplomacy by amending the restrictions on domestic travel,” the senior official said. “Those have been extremely restrictive.

The Biden administration will return to earlier practice, which is to give diplomats from countries such as Iran and North Korea a limited latitude to travel within and around New York.

“Essentially this just reverses the last administration’s imposition of additional travel restrictions and returns the domestic travel controls on Iranian representatives back in line with those of several other missions to the UN and that’s just to return to our long standing posture that we’ve had with regard to the domestic travel of Iranian representatives at the UN,” the official said.

The moves coming following a meeting between Secretary of State Tony Blinken and his French, German and British counterparts — the E3 — earlier in the day ahead of Iran’s expected move to curb short-notice nuclear inspections next week.

The foreign ministers urged Iran not to take the additional step out of compliance with the deal, according to a joint statement released after the meeting.

The first senior State Department official said the idea that the talks could dissuade Iran from taking that step “was not part of the calculation.”

“President Biden wasn’t particularly eager or in the mode of trying to take unilateral steps to try to prevent Iran from doing what it shouldn’t do in the first place,” they said. “So these are steps that we took because we thought they were the right steps in order to resume diplomacy.”

Biden is expected to address the matter in a series of foreign policy engagements Friday, according to a senior administration official.

US says the moves are ‘concessions to common sense’

Sources had earlier indicated to CNN that as Tehran prepares to ban short notice inspections of its nuclear sites, behind the scenes, Biden administration officials were making clear they were determined not to succumb to pressure to make imminent concessions or return too quickly to the agreement.

The senior State Department officials made clear Thursday evening that they do not see their openness to the EU-led talks as a concession or a reward of Tehran’s escalatory moves.

“I’d say these are not concessions to Iran, these are concessions to common sense,” the first senior State Department official said. “I think we’ve seen what four years of maximum pressure and not talking to Iran have yielded, an accelerated Iranian nuclear program and a more aggressive Iranian posturing in the region.”

The Biden administration is already facing criticism from Republicans like Rep. Michael McCaul, the top GOP member on the House Foreign Affairs Committee, who accused them of “already making concessions in an apparent attempt to reenter the flawed Iran deal.”

The first senior State Department official said the only way to begin resolving the impasse with Iran over the nuclear deal or even begin discussing the substance of the deal would be to meet and discuss how to make that happen. But the official made clear that did not mean success was necessarily the result.

“We’re not going to resolve it by assuming that one side is going to take steps on its own,” the official said. Saying they assumed “this is going to be a painstaking and difficult process,” the official said it could take “some time … to see whether both sides agree on what they will define as compliance with compliance, what does it mean, what’s the sequence. What steps does the US have to take, what steps does Iran have to take.”

That process is “not something that is sort of preordained,” the official said, “it’s going to involve getting together and talking about those and that’s why the meeting invitation is important and why we said that we will be prepared to go to if in fact … you were able to organize such a meeting.”

On Thursday, coinciding with the US-E3 meeting and prior to the State Department announcement, EU President Charles Michel spoke to Iranian President Hassan Rouhani to “exchange views” on the JCPOA as well as the economic and social impact of the Covid-19 pandemic — a potential area where the US and EU could make goodwill gestures.

Michel emphasized the importance of Iran’s compliance to the JCPOA and EU concern over its expected move to suspend the Additional Protocol, according to a EU statement. He also “indicated that preserving a space for diplomacy, underpinned by positive steps, was crucial at this stage.”