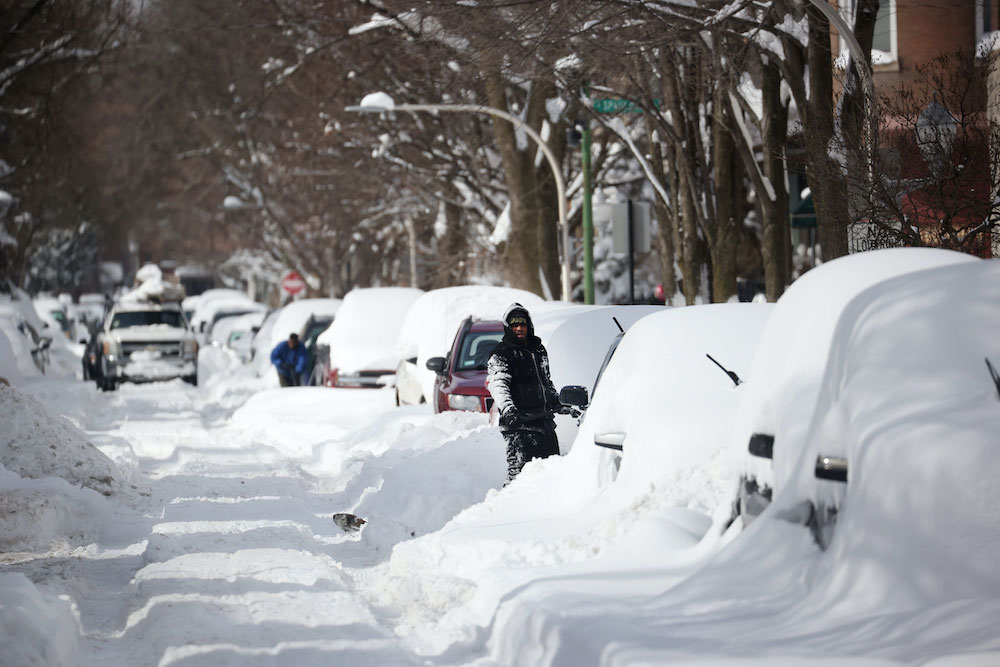 (CNN) — Another winter storm is raking Texas and will menace the Southeast through the Mid-Atlantic on Wednesday, piling more misery on areas already struggling with power and water outages, freezing temperatures and slippery roads.

In Houston, already home to many of the state’s millions of dayslong power outages, Angelina Villarreal was trying to stay warm Wednesday in her chilly living room, with power out since Monday and outside temperatures hovering near freezing.

Her bedroom flooded, thanks to a burst pipe, she told CNN.

“It’s just me, my mom, my sister and my pets trying to keep warm and eat whatever we have here that hasn’t gotten spoiled,” Villarreal wrote on Twitter.

About 125 million people are under winter weather alerts extending from Texas — where millions have been without power in often freezing temperatures — to New England. On Wednesday, snow and freezing rain are expected to bring perilous travel conditions and more power outages from the South to the Mid-Atlantic.

“(Wednesday’s storm is) the worst of the winter events we have experienced over the last week,” the weather service’s office in Austin wrote Wednesday.

This comes as more than 3.2 million homes and businesses were without power Wednesday morning across portions of a country already coping with a week of winter storms, according to PowerOutage.US. More than 2.7 million of those were in Texas, where officials say high demand and freezing conditions crippled utilities’ power generation and left many turning to fireplaces, vehicles or other means to stay warm.

Over the last few days, wintry weather has left states with more temperate climates — including Texas, Louisiana, Oklahoma, Mississippi, and Kentucky — facing hazardous roads, power outages and water shutoffs over the last few days. It has led to at least 26 deaths across the country, including three people who died in carbon monoxide related incidents and one driver who hit a snowplow.

On Wednesday, according to the National Weather Service:

— 3 to 6 inches of snow could fall from Arkansas and the Mid-South to the central Appalachians.

By Thursday, the storm is expected to drop snow from the Mid-Atlantic to New England.

Along with power outages, the severe weather has brought destruction, injuries and even death.

Tulsa, Oklahoma, reported more than 100 water main and service line breaks due to the arctic conditions, according to the Waterline Break Board on the City of Tulsa’s website.

“Water line breaks in Tulsa are creating dangerous conditions,” Tulsa Police tweeted with a photo of a parked patrol car that became stuck when a water line broke and the water froze around the vehicle’s wheels.

As of Monday, 123 people were hospitalized across the state with weather-related injuries.

A strong winter storm in Portland has caused “catastrophic destruction” to the city’s electric system, Portland General Electric said late Tuesday night in a post on social media. The power company said there are at least 8,493 wires down and at least four substations are out.

“A series of historic storms has hit our communities, bringing three waves of snow, ice and wind. As each storm rolls in, more ice builds up on trees and power lines, that causes more and more trees and power lines to fall,” the company said in a post on their website.

Officials have warned residents that the conditions make the roads treacherous, and deadly traffic incidents have been reported.

One person in Medina County, outside of Cleveland, was killed when they hit a snowplow with their vehicle, Ohio’s Transportation Director, Jack Marchbanks, said Tuesday.

According to the director, 11 snowplows have been hit in Ohio just in the past two weeks, compared to eight hit all last winter. “So it’s very treacherous out there,” Marchbanks said.

In North Carolina, the larger weather system produced a tornado that ripped through Brunswick County on Monday, killing three people and injuring 10 others, officials said.

“We had very minimal warning,” Edward Conrow, Brunswick County’s Director of Emergency Services told reporters at a press conference Tuesday. “We had a tornado warning from the National Weather Service that was broadcast, but at that time the storm was already on ground, causing damage.”

Travel conditions have also led to thousands of canceled flights, according to FlightAware.com

Weather hazards have also caused roadblocks in the nation’s battle against the coronavirus pandemic.

States spanning from Colorado to Georgia have delayed their shipments or vaccination appointments due to the weather conditions.

Impacts to a vaccine distribution hub in Tennessee will delay shipment of doses to Colorado and other states, according to Colorado State Joint Information Center. Ohio was expecting shipments directly from Pfizer and Moderna that will be delayed one to two days due to the severity of the weather, Gov. Mike DeWine said Tuesday.

Many health care providers in Georgia are rescheduling their vaccination appointments due to the delays, but when they can reschedule them will depend upon when shipments resume, which could come next week, the Georgia Department of Public Health said Tuesday.

Vaccines that are being delivered to Illinois will be directed to its “Strategic National Stockpile Receipt, Store, and Stage site” in anticipation of such delays, according to a state press release.

Texas has suffered the brunt of the storm, and many there are suffering the freezing temperatures with no power to heat their homes.

Fort Worth Mayor Betsy Price told CNN Tuesday night that she was been without power or water for around 38 hours.

“It got down to a record low last night, two degrees below,” Price said. “So, it is really cold, and this is Texas, North Texas. We don’t get this kind of weather. People don’t always have the clothing for it, and certainly don’t drive in it very well.”

“If people have neighbors that they know don’t have heat and maybe they do, offer to take them in, let’s watch out for each other, let’s try to do the right thing by helping, share what we have,” the mayor urged residents. Price says the city has the resources to open more shelters if needed and will evaluate the situation hour by hour.

For residents who are homeless and can’t be served by shelters, Waco, Texas, is providing 15 hotel rooms for six nights, said Mayor Dillon Meek.

“This is not a sustainable solution but helps keep vulnerable persons from sheltering in single digit temperatures.”

0 0 0 0
Previous : Ashley Judd shares photos of ‘grueling’ accident and rescue; ‘I wake up weeping in gratitude’
Next : Key Democrats unhappy with Biden’s reluctance to cancel $50,000 in student debt