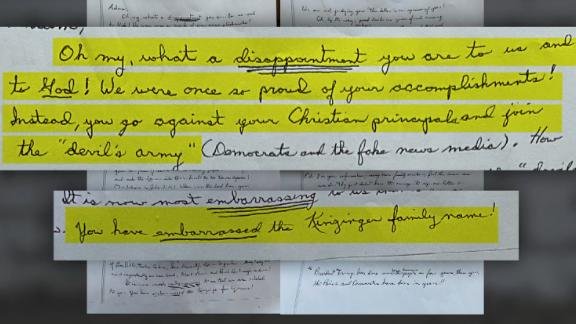 Eleven members of Republican Rep. Adam Kinzinger‘s family sent him a vitriolic letter accusing him of being a member of the “devil’s army” in light of his criticism of then-President Donald Trump after the January 6 insurrection, The New York Times reported Monday.

“Oh my, what a disappointment you are to us and to God!” they wrote to the Illinois Republican, according to a copy of the letter obtained by the paper, rebuking his “horrible, rude accusations of President Trump.”

“It is now most embarrassing to us that we are related to you,” they continued in the letter, which was dated January 8, after Kinzinger called for the 25th Amendment to be used to remove Trump from office. “You have embarrassed the Kinzinger family name!”

Kinzinger was one of 10 Republicans who later joined all House Democrats in voting to impeach Trump last month for “incitement of insurrection” in light of his role in encouraging the riot at the US Capitol.

The Illinois Republican told CNN’s David Axelrod during an episode of “The Axe Files” podcast released last month that he is willing to lose his seat over his vote to impeach Trump.

“I did it knowing full well it could very well be terminal to my career,” Kinzinger said of his vote at the time. “But I also knew that I couldn’t live with myself having, you know, try to just protect it and just felt like the one time I was called to do a really tough duty, I didn’t do it.”

The letter comes as many Republicans who have opposed the former President, including by voting in favor of Trump’s impeachment or conviction, grapple with the fallout from their own party. The blowback these lawmakers have faced has underscored the hold Trump continues to have over the Republican base.

CNN has not verified the authenticity of the letter, and has reached out to Kinzinger’s office for comment.

Kiniznger told the Times that the family members who signed the letter are experiencing “brainwashing” from conservative churches that have misled them.

Karen Otto, Kinzinger’s cousin, wrote the letter and mailed it to Kinzinger’s father — to ensure that the congressman would see it — and to other Republicans across the state, the Times reported.

“I wanted Adam to be shunned,” she told the Times.

Kinzinger is from a large family in central Illinois, and his father has 32 first cousins, according to the paper. The congressman has previously referenced such familial backlash over his vote.

“My dad’s cousins sent me a petition — a certified letter — saying they disowned me because I’m in ‘the devil’s army’ now,” he told Business Insider last month. “It’s been crazy, when you have friends — that you thought were good friends that would love you no matter what — that don’t.”

0 0 0 0
Previous : WHO authorizes AstraZeneca’s COVID vaccine for emergency use
Next : How to avoid carbon monoxide poisoning while trying to stay warm during power outages