DRIGGS — Idaho Fish and Game officials are proposing to significantly reduce archery and rifle hunting tags for female elk and deer this fall in the Palisades Zone. The area includes the Bighole Mountains, the Snake River Range south of Teton Valley and the west slope of the southern Teton Range in Idaho.

The Upper Snake River Regional Wildlife Manager Curtis Hendricks said the proposals in hunting zones 64, 65 and 67 for female elk and deer have been drafted to “quickly increase” the herd populations that have been impacted by waning winter ranges, livestock impacts and development growth, particularly in the Swan Valley area.

“It’s not normally one giant impact over there,” Hendricks said of the Palisades area. “It’s not one development that hurts, but over time with more development, that can have a bigger impact on wildlife. It’s like death by a thousand cuts and it’s a never-ending challenge in the Teton Valley and Swan Valley areas.”

Hendricks said the proposed hunting reduction in that area is based around the Fish and Game wildlife objectives for the elk and deer populations. He said for a number of years, sportsmen have been reporting concern over deer and elk populations in the Palisades Zone. 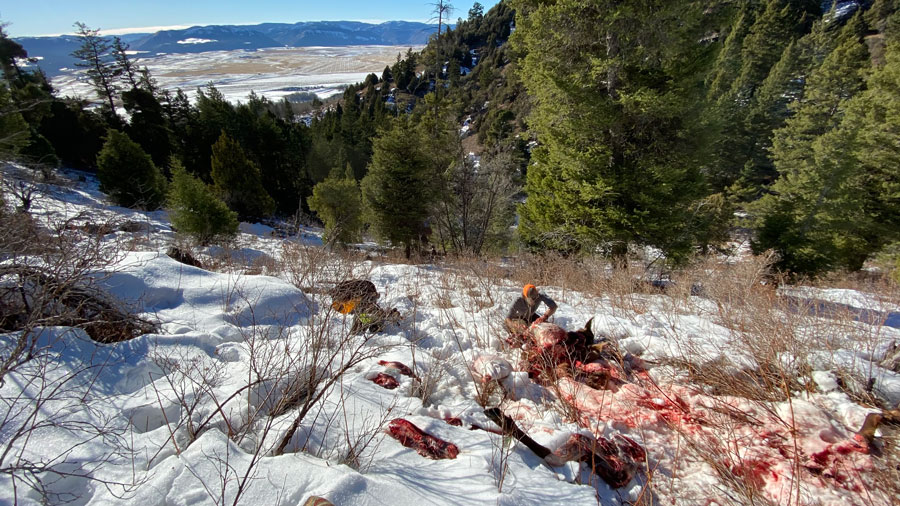 A hunter field dresses a female elk on the slopes of the Snake River Range in the Palisades hunting zone in December 2020. Idaho Fish and Game are proposing to significantly reduce A-tags for the elk and deer hunts for the 2021 season in an effort to repopulate those herds. | Courtesy photo

The Fish and Game population objective for this zone is between 400 and 600 female elk. Hendricks said last year they counted 312 female elk, just below the low end of the objective. He figures that if the hunting is reduced in this area, an estimated 70 female elk would be saved from harvest. Add the estimated 40 calves that are birthed per 100 female elk and he said in theory that herd could see healthier numbers in two years time.

Deer numbers in the 64 to 67 hunting zones are down 22 percent said Hendricks. “It’s not surprising,” he said. “With the last few winters out there we saw elevated adult mortality with does. Sportsmen have come and asked us to build back that population.”

Hendricks said that more tags will be available in the Island Park area where the Sandhill elk herd has seen a growth in population.

Virtual open houses will be held Feb. 16–25 for each region

According to a press release issued Feb. 1, Fish and Game will be setting new seasons for upcoming deer, elk, pronghorn, black bear, mountain lion, and wolf hunts in March. Hunters can now see proposed seasons and changes and provide comments. The comment period deadline is Feb. 25. There will also be a series of virtual open houses Feb. 16 to 25.

The easiest way for hunters to review proposals and weigh-in will be by visiting the big game proposals webpage at idfg.idaho.gov/big-game. The proposals are posted by region and separated by species within each region.

The public comment process will also include virtual open houses hosted by Fish and Game’s staff for each of its regions, along with one statewide open house.

In addition to the virtual open houses, regional Fish and Game staff will also host call-in sessions to provide people without internet access an opportunity to weigh in on the proposals.