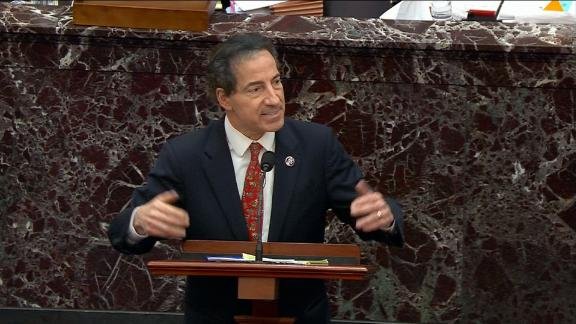 The Senate is poised to vote Saturday on whether to convict former President Donald Trump for inciting the insurrection at the Capitol last month in the culmination of the first impeachment trial of an ex-president in US history, though Democrats will need to decide on whether to seek witnesses in the trial first.

The final vote is not set, but the Senate is racing toward concluding the trial in five days — unless the Democratic impeachment managers seek witnesses. That could extend the trial beyond Saturday, although senators in both parties are not expecting any witnesses to be called.

Democrats have been debating whether to call witnesses in light of new details that have emerged with the trial underway this week, according to multiple sources, including new descriptions about Alabama GOP Sen. Tommy Tuberville’s call with Trump as the riot unfolded and new details about House Minority Leader Kevin McCarthy’s call with the former President.

It’s unclear what has been decided, but it should become clear soon after the Senate gavels into session at 10 a.m. ET.

Multiple aides said the debate is that witnesses could clarify the timeline of what Trump knew and when in a compelling way, but it’s not clear that the witnesses would change minds of senators already dug in about the verdict. Witnesses would also extend the trial considerably with Senate Democrats eager to move on to President Joe Biden’s agenda.

Democratic senators said Senate Majority Leader Chuck Schumer signaled to them on a call Saturday morning he doesn’t know if House Democrats will ask for witnesses.

“We were told just a few minutes ago we don’t know,” Sen. Ben Cardin of Maryland told CNN.

Sen. Sheldon Whitehouse, a Rhode Island Democrat, tweeted Friday evening that the managers should depose McCarthy and Tuberville. Asked about it Saturday, Whitehouse told reporters, “Well it’s actually not my call, so we’ll see what team Raskin decides to do,” a reference to lead impeachment manager Rep. Jamie Raskin of Maryland.

A person familiar with Trump legal team strategy said that if Democrats do seek witnesses, Trump’s legal team will try to call House Speaker Nancy Pelosi and Washington, DC, Mayor Muriel Bowser. Of course they would need 51 votes to subpoena witnesses, so that would not happen.

The managers have repeatedly declined to say whether they will seek witnesses, though most senators don’t expect them to do so. “No comment. No comment,” Raskin said as he left the Capitol Friday evening.

If there are no witnesses, the impeachment managers and Trump’s lawyers will make closing arguments of up to two hours each before the Senate will move to a final vote, which could be held at 3 p.m. ET, though that’s not finalized. It’s still not clear whether senators will seek to make speeches to explain their votes once the legal teams conclude.

The outcome of the final vote was already telegraphed earlier in the week, when the Senate voted 56-44 that the impeachment trial was constitutional. The GOP senators who voted the trial of a former president was unconstitutional said that was what would determine their final vote, leaving the Senate well short of the two-thirds — or 17 GOP senators who would have to join all 50 Democrats — needed for conviction.

Senate Minority Leader Mitch McConnell told his colleagues Saturday morning he would vote to acquit Trump, according to a source familiar with the conversations. McConnell plans to explain his decision after the final vote.

The six Republicans who voted the trial was constitutional are the GOP senators who have left open the possibility they could vote that the former President is guilty, after 10 House Republicans joined Democrats to impeach Trump in the House last month. Several of those Republican senators — Susan Collins of Maine, Lisa Murkowski of Alaska, Mitt Romney of Utah and Bill Cassidy of Louisiana — pressed Trump’s lawyers during the Senate’s question-and-answer session Friday over the actions Trump took when he learned about the riots unfolding and tweeted that then-Vice President Mike Pence was lacking courage while he was being evacuated from the Senate.

0 0 0 0
Previous : AP source: GOP leader McConnell will vote to acquit Trump
Next : Man rushed to hospital after multi-vehicle crash on I-15