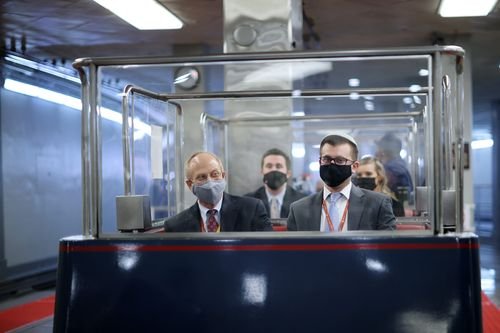 The Senate’s second impeachment trial of Donald Trump raced toward a conclusion on Friday, with the former President’s legal team quickly finishing its presentation and senators taking their turn to pose written questions to the legal teams.

Trump’s team wrapped up its presentation in a little more than three hours before the question-and-answer session concluded several hours later Friday evening. In their brief argument, Trump’s team equated the former President’s speech with Democrats’ rhetoric — showing lengthy montages of Democratic politicians saying they would “fight” — to argue that Trump’s words on January 6 did not incite the rioters who attacked the Capitol afterward.

During the Senate questions, the key Republicans who could vote to find Trump guilty focused on the actions of the then-President as the riot unfolded and then-Vice President Mike Pence was endangered, a topic that Trump’s lawyers did little to address during their argument or when the GOP senators posed the questions.

The defense team’s presentation showed Democratic reactions to videos of protests and riots over police violence last year, comparing them to the attack on the US Capitol, while they argued that Trump’s language telling his supporters to “fight like hell” was merely “ordinary political rhetoric.” Trump’s lawyers also falsely suggested Antifa was responsible for the deadly riots, rather than Trump supporters, and raised Trump’s false claims of voter fraud in Georgia.

The presentation underscored the goal of Trump’s team Friday: Do no harm. Unlike the Democratic managers, who hoped to win over Republican senators with their presentation, Trump’s lawyers expect to already have the votes they need for acquittal, as most Republican senators are saying they will vote to acquit Trump because they believe the trial is unconstitutional.

The Senate could vote on conviction Saturday, when the trial resumes at 10 a.m. ET. At that point, the House managers could request witnesses, though they are unlikely to do so. If no witnesses are sought, the two sides would each get to make a closing argument, and a final vote could occur at 3 p.m. ET, though that is still not locked in.

During their two days of arguments, the House managers tried to force senators to confront the horrific images in a bid to change Republican minds, while Trump’s team was more than content with a partisan draw. At the first break of the day Friday, the partisan division was on display in a way it had not been in the two days when the managers presented: Republicans praised Trump’s lawyers and Democrats universally panned them.

In the final moments of Friday’s session, Senate Majority Leader Chuck Schumer also paid tribute on the floor to US Capitol Police Officer Eugene Goodman, whose heroic acts during the riot were seen during trial video earlier this week. Schumer announced that he would ask the Senate to pass legislation to award him the Congressional Gold Medal, which passed by unanimous consent moments later. The entire Senate stood and turned to Goodman with a lengthy ovation to acknowledge his heroism. Goodman put his hand to his heart in recognition.

After three days of mostly scripted presentations, the question-and-answer session was more free-flowing, although the House managers and Trump’s lawyers were clearly prepared for the friendly questions they received from senators.

The questions, alternating between Democrats and Republicans, were submitted on a notecard to Sen. Patrick Leahy, the presiding officer as Senate president pro tem, and they were read by the Senate clerk.

Democrats’ questions to the managers and most GOP questions to the President’s team were intended to help bolster their respective cases. There were a few exceptions, such as when independent Sen. Bernie Sanders of Vermont asked both sides whether Trump had won the election as he falsely claimed.

But the most interesting questions came from some of the handful of Republican senators open to conviction: Sens. Susan Collins of Maine, Lisa Murkowski of Alaska, Mitt Romney of Utah and Bill Cassidy of Louisiana.

Collins and Murkowski jointly asked Trump’s legal team to describe when he had learned of the riots and the actions he had taken. They asked the lawyers to be as specific as possible, but Trump attorney Michael van der Veen said only that Trump had tweeted at 2:38 p.m. ET before the lawyer launched into an attack against the House Democrats for what he called lack of due process.

“I didn’t really feel that I got a response, but I’m not sure that that was the fault of the counsel,” Collins said when asked about the answer. “One of the problems is with the House not having hearings to establish exactly what happened when, it’s difficult to answer a question like that.”

Murkowski also expressed dissatisfaction with the answer. “It was like, wait a minute, that wasn’t very responsive,” Murkowski said.

After the Senate session ended for the day, van der Veen approached Murkowski and Collins at their desks and the three briefly chatted.

Romney asked both sides whether Trump had known that Pence was in danger when he criticized his vice president in a tweet at 2:24 p.m. while Pence was being evacuated from the Senate.

“The answer is no,” van der Veen responded.

Later, Cassidy asked about Trump’s tweet and the conversation Sen. Tommy Tuberville of Alabama had had with Trump minutes beforehand, in which, Tuberville said this week, he had told Trump the vice president was being evacuated.

Cassidy said Trump’s tweet “suggested President Trump did not care that Vice President Pence was in danger,” asking whether it showed Trump was tolerant of intimidation of Pence. Van der Veen responded that the answer was no, but said that he disputed the facts underlying the question, even though Tuberville’s description of the call was recounted on the record to reporters this week.

Asked if he was satisfied with the response, Cassidy said, “Not really.”

“I didn’t think it was a very good answer,” he said, adding that the call “obviously wasn’t hearsay” because Tuberville had confirmed it.

In his responses, van der Veen repeatedly attacked and criticized the House managers, suggesting at one point that Rep. Jamie Raskin of Maryland, the lead impeachment manager, was having fun and chiding him that this was his own most miserable time in Washington.

Raskin, whose family members were trapped in the Capitol during last month’s riot, later responded to van der Veen, “For that I guess we’re sorry, but man, you should have been here on January 6.”

During the defense presentation, van der Veen played clips of congressional Democrats objecting to the certification of Trump’s win in the 2016 election, including Raskin. And they ran a nearly 10-minute montage of Senate Democrats, the managers and other politicians saying the word “fight,” suggesting they used the same rhetoric as the former President.

Trump’s lawyers also went after House Democrats, accusing them of political retribution in impeaching the former President a second time after going after him throughout his time in office. They accused the managers of selectively editing footage of Trump’s speeches and tweets and ignoring Trump’s comments for protesters to remain peaceful.

“The hatred that the House managers and others on the left have for President Trump has driven them to skip the basic elements of due process and fairness,” Trump attorney David Schoen said.

Inside the Senate chamber, Republicans reacted with chuckles and laughter at various points, nodding in agreement with the Trump lawyers’ presentation. Democrats were mostly stone faced at the start of the lengthy montage, but that changed quickly as more and more clips played. There were constant murmurs in the chamber, as well as whispering, some laughing and note passing.

Republicans had panned the initial meandering presentation from Trump’s team on Tuesday, but they praised his attorneys on Friday.

“The first two hours I thought were well put together,” she said.

To Democrats, the Trump lawyers put forward a “bogus argument,” said Sen. Tim Kaine, a Virginia Democrat. “Donald Trump was told that if he didn’t stop lying about the election people would be killed. He wouldn’t stop, and the Capitol was attacked and seven people are dead who would be alive today. That’s what I think about this,” he said.

“I don’t remember any violent mobs after any of those comments, so it’s just not the same thing,” Heinrich said.

Van der Veen acknowledged the abhorrent violence at the Capitol on Friday, but also suggested that groups of “extremists of various different stripes and political persuasions,” including Antifa, pre-planned the attack, meaning Trump could not have incited it.

“Nothing in the text could ever be construed as encouraging, condoning or enticing unlawful activity of any kind,” van der Veen said. “Far from promoting insurrection against the United States, the President’s remarks explicitly encouraged those in attendance to exercise their rights peacefully and patriotically.”

To be sure, the arguments from Trump’s lawyers included factually dubious and outright false claims about the circumstances of the riots. Antifa was not responsible for the riots at the Capitol — the dozens of charging documents have shown many well-known leaders of far-right groups led the attackers. Though it is hard to pinpoint the political ideology of some participants in the riot, video evidence and court documents conclusively show that the riot was perpetrated by Trump supporters.

A top FBI official told reporters in early January that they had seen “no indication” that Antifa members had disguised themselves as Trump supporters. Even House Minority Leader Kevin McCarthy, a California Republican, said on the House floor last month during the impeachment debate there was “absolutely no evidence” Antifa caused the riots.

The defense team’s focus on Trump’s January 6 speech also ignored the argument House Democrats had made earlier in the week that Trump’s incitement dated back months and involved more than just that speech.

The most substantive case Trump’s lawyers made was that Trump’s speech on January 6 did not amount to incitement and was protected by the First Amendment, just like other political speech is protected speech. Trump’s team argued that he used the word “fight” in a political context at his speech at the January 6 rally, such as fighting Republicans who voted against him in a primary.

The Trump team’s presentation concluded with an effort to push back on the allegations that Trump told Georgia Secretary of State Brad Raffensperger to “find” enough votes for Trump to win, as Castor raised many of the false allegations about voter fraud in Georgia to argue Trump had done nothing wrong when he called Raffensperger.

This story and headline have been updated with additional developments Friday.

0 0 0 0
Previous : The story keeps getting worse for Andrew Cuomo on Covid-19
Next : UPDATE: I-84 back open after closure due to weather, drivers encouraged to take it slow