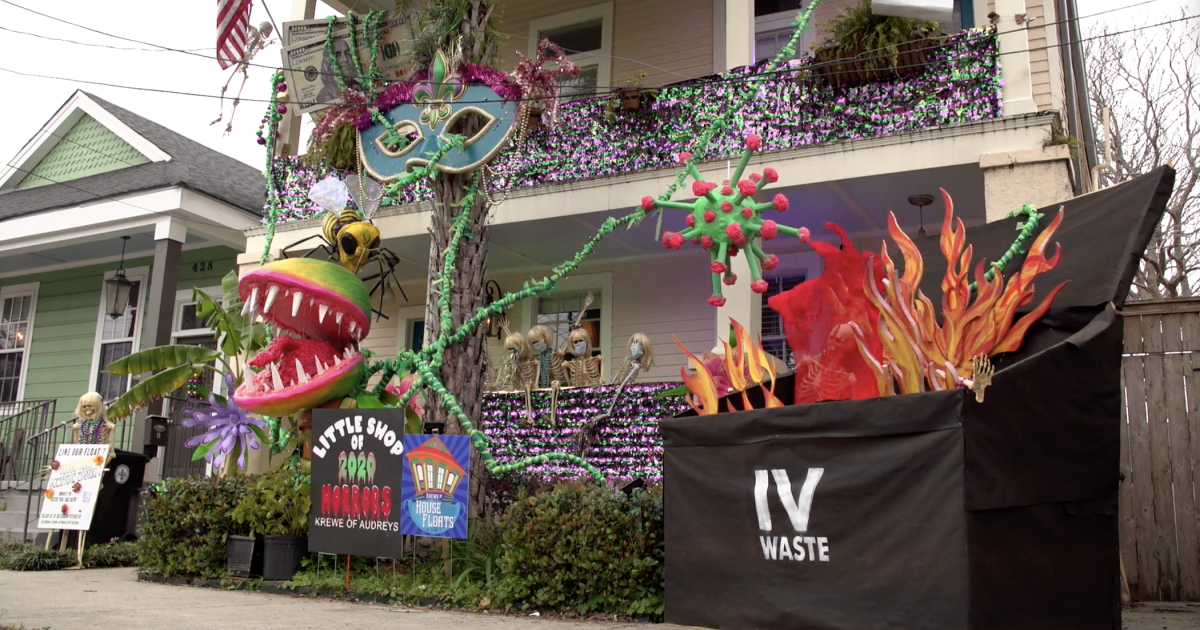 NEW ORLEANS, La. — These days, the streets of New Orleans are alive, with homes transformed into Mardi Gras floats.

“I’ll decorate my house,” Megan Boudreaux recalled thinking when she heard Mardi Gras parades were canceled in the city.

Boudreaux then had the idea that her neighbors might want to join in, too.

With that, an idea born out of coronavirus restrictions went, well… viral.

“I am the fool who opened my mouth on the internet,” Boudreaux said with a laugh.

Nicknamed “Admiral B,” Boudreaux commands the fleet of more than 3,000 decorated homes in New Orleans, which are part of the new Mardi Gras “Krewe of House Floats.”

Instead of floats going by spectators, people can (in a socially-distant way) go by homes-turned-floats instead.

“It’s so overwhelming,” Boudreaux said, about her idea taking off. “Like, I can’t even keep track because there’s a new favorite one every day.”

On one street in the Algiers Point neighborhood in New Orleans sits the Little Shop of 2020 Horrors, a house float featuring a literal dumpster fire, complete with a murder hornet and toilet paper shortage.

“We’ve been like to the grind and with cramping fingers and hurting feet,” said Rene Pierre, who, with his wife, Inez, owns Crescent City Artists. “It’s been nonstop.”

The Pierres thought their days of creating parade floats were over.

“We were like, ‘OK, we’re done,’” Inez said, recalling when all Mardi Gras parades in the city were canceled.

Then, the Krewe of House Floats rolled into their lives.

“I had to hire a staff,” Rene said. “I went from just me in a backyard, to hiring six people.”

They’re even booked to create house floats next year.

“This was definitely the turnaround we needed,” Rene said, adding, “Thank you, Megan!”

“Everybody was looking for a little joy,” Teng said. “I reached out to one of the local Mardi Gras artists and I was like, ‘Do you think you could make me a big Big Freedia?’ Then, I just blinged her out, bedazzled her and put some eyelashes on her and a crown because every queen needs her crown.”

Now, The Queen of Bounce house is welcoming visitors from all over, including Eric Morgan, who drove in from Atlanta just to see it.

“Oh my god, you already know!” Morgan said with a laugh. “Oh, I love her. Yeah, this is my home. I had to come see to this. The number one house to come see, so I’m happy.”

Teng is happy, too.

Just like during Carnival season, where you can see floats in parades both during the day and at night, the Krewe of House Floats is going for the same thing. Many house floats are specially lit at night, creating a magical experience, even after the sunsets.

“We got hit so hard with COVID,” said Teng, who is also a frontline health care professional. “People just needed some joy.”

It’s all thanks to a new Mardi Gras tradition, helping find light in the darkest of times.

The Krewe of House Floats created an interactive, online map of all the decorated Mardi Gras homes in Louisiana, as well as around the rest of the country and even the world. There are now house floats overseas in the U.K., Australia, the Netherlands and Abu Dhabi. You can check out the map, by clicking here.

0 0 0 0
Previous : Idaho woman pleads guilty to murdering her husband
Next : Air travelers to Canada to isolate at hotels starting Feb 22