Six flickers, a mixed flock of chickadees, American goldfinch, House sparrows, House finch and a pair of Eurasian-collared doves were leisurely eating brunch when a flicker and several chickadees sounded a warning call. Their meal was being interrupted by an attack by a Sharp-shinned hawk – also looking for a meal.

Like most flock-shooting with too many choices available, the hawk was unsuccessful on that first attack. She found a perch where she could watch the feeders and waited patently for thirty minutes until a House finch made an attempt to get to the sunflower seed feeder.

The chase was on.

The finch made the fatal mistake of diving toward a lilac bush allowing the hawk to go into a swift dive; catching the finch just before it reached safety. Brunch was served.

The hawk found a suitable branch where it could pluck the hapless bird’s breast before it began eating.

This Sharp-shinned hawk was one of three that visit my backyard feeders and is the oldest one of the three. Eye color of these smallest hawks of the United States are an indicator of their age. Young Sharp-shinned hawks have yellow eyes which darken to a deep red as they age. This successful hawk’s eyes were a black/red compared to one with yellow eyes and another with orange eyes. 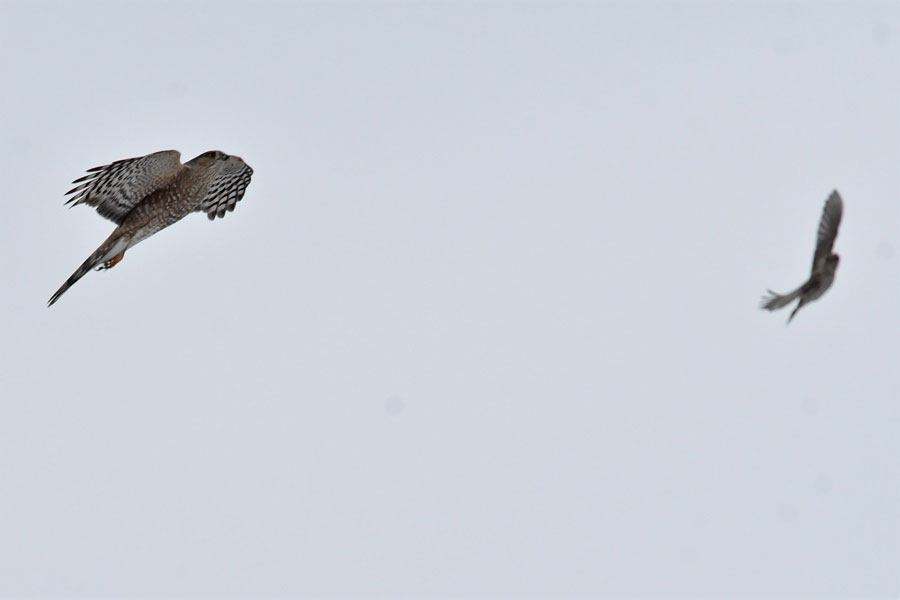 It had become accustomed to me, allowing me to watch it hunt and eat as it makes multiple trips to my feeders daily. Her size indicates that she is a female as she is larger than the other two that regularly comes to my backyard. Females of this specie are generally a third larger than the males.

The young male with yellow eyes is also a very successful hunter as it found the birds when flushed from the feeders would hide in my fir and spruce trees. It crashes into the cone laden top, captures a bird and carries it to a lower branch to consume it.

Most of these hawks that live in the Upper Snake River Valley are year-around residents while in other areas of the country they are migratory. With the increase of people engaged in feeding songbirds during the winter, experts believe that backyard feeders have allowed Sharp-shins to winter further north than they have traditionally done. During the DDT era, their populations dropped dramatically but with pesticide control and increase in bird feeding, their population has increased.

The secretive nature of their nesting, it has been hard for scientists to study their nesting behavior. They nest in dense thickets and the male will hunt for the female and the nestlings once they are hatched, but little is known about the rest of their summer activities. 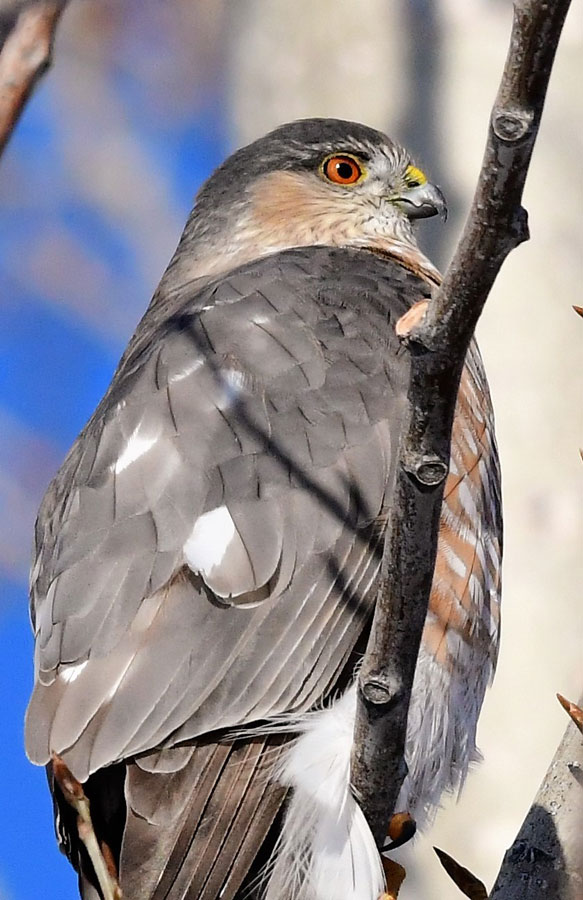 I have hoped that the three Sharp-shinned hawks will continue to visit my backyard through the Great Backyard Bird Count (GBBC) that will be conducted from February 12 -15. This is my favorite bird count as it is about individually counting birds in the area where we live or of areas that are our favorite areas to observe birds.

The count is for both experienced and beginner birders and is done by a person watching an area for at least 15 minutes, counting the numbers of each specie that is observed and then reporting those numbers.

I will attempt to do a daily count of my backyard each day as well a hit a home with Blue jays still showing up; the Henrys Fork of the Snake River near St. Anthony and again near the Hibbard/Plano bridges. I may even try to get to the Howe area for another count of the raptors to compare with the numbers from the Howe Christmas Count.

Let me know if you are having Sharp-shinned hawks visit your feeders as I keep hearing about lots of these birds in the area.

Please be safe while birding and stay healthy as we work our way through this pandemic. 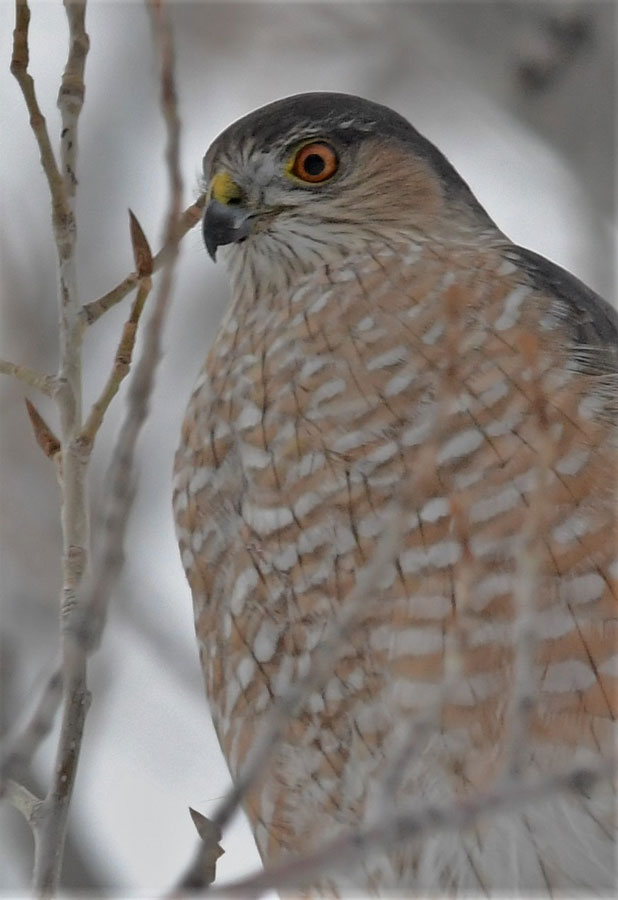 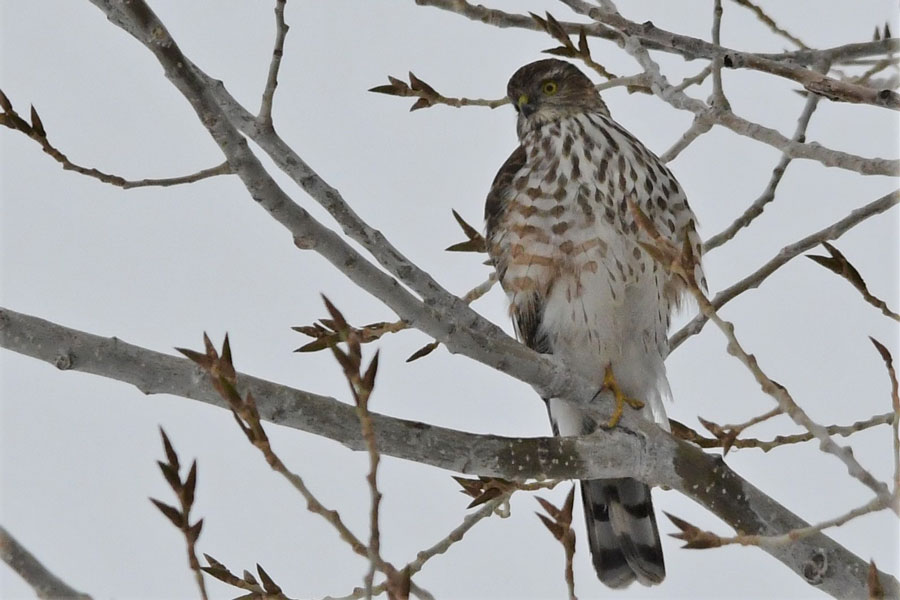 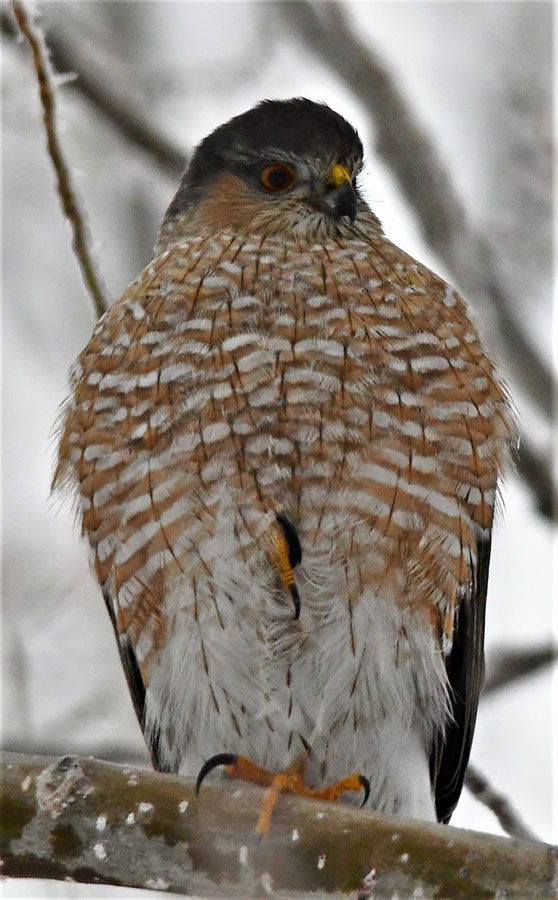