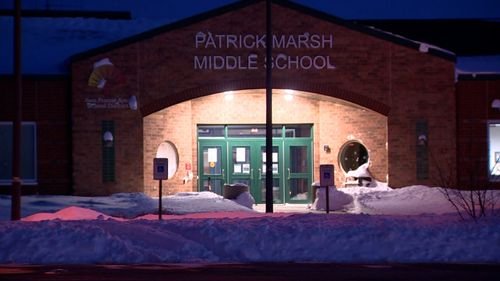 Teachers at a Wisconsin middle school have been placed on administrative leave after an unapproved lesson about slavery upset families.

Sixth graders at Patrick Marsh Middle School in Sun Prairie, Wisconsin, received an assignment about ancient Mesopotamia that asked a question about how a slave should be treated, the school’s principals said in a letter to students on Monday.

“A slave stands before you. This slave has disrespected his master by telling him ‘You are not my master!’ How will you punish this slave?’” the assignment read, according to a parent who shared a photo on her Facebook page.

The punishment? “According to Hammurabi’s Code: put to death,” the assignment read.

The question was related to the Code of Hammurabi, the code of law that set punishments and fines in the ancient region of Mesopotamia.

Sun Prairie Area School District apologized in a letter sent to all families in the district on February 1.

“We are writing today to apologize for a grave error in judgment that occurred during sixth-grade social studies instruction at Patrick Marsh Middle School,” the district wrote in the letter. “A small group of our teachers developed and used an activity that was neither racially conscious nor aligned to our district mission, vision, values, curriculum, or district equity statement.”

The district stopped instruction of the lesson and is investigating the incident, it said in the letter. The teachers involved with the lesson have been placed on administrative leave, the district wrote.

“In our preliminary findings, we have determined the lesson was not a part of our district curriculum and therefore, no student should participate in or complete the assignment,” the letter read. “The staff issued a direct apology to the students in the class and their families.”

The timing of the assignment rubbed salt in the collective wound of African American families in the district — it was sent to students on the first day of Black History Month.

Dazarrea Ervins posted a screen grab of the assignment on her Facebook page after her son saw the insulting question.

“I was just taken aback,” Ervins told CNN affiliate WKOW. “I was like, ‘Oh my gosh. Are you kidding me?’”

Her son, sixth-grader Zavion Hopkins, showed her the question, not knowing what to do.

“‘How does this make you feel? Is this right or wrong?’” she told WKOW. “But to pose the question as, ‘How would you punish this slave?’ I mean, come on.”

CNN reached out to Dazarrea Ervins but has not heard back.

Patrick Marsh Middle School also apologized for the insensitive lesson. “We regret that this assignment was not racially conscious and did not align to our district’s mission and vision of equity,” the letter read.

The school explained the intent of the lesson and the context in which it was meant.

“The purpose of the activity was to help students understand how order was kept in the early civilization, how the laws that were developed, and how unjust they were,” the letter read. “One of the scenarios posed was directly related to the treatment of slaves in Mesopotamia; this was upsetting to students and parents. Above all, this assignment hurt our African American community.”

The school district said it will have its social studies curriculum review committee examine the department’s teaching practices “with the lens of racial trauma and curriculum violence,” it said.

0 0 0 0
Previous : Pocatello preparing to overturn face covering ordinance
Next : The fight over Marjorie Taylor Greene poses a threat to the entire country